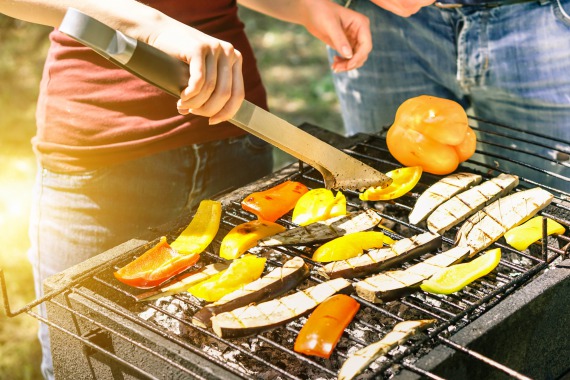 Ah, summer. The time for juicy watermelon, refreshing lemonade, and…mouthwatering barbecue. BBQ might seem off-limits for those trying to stick to a strict or healthy diet, but it isn’t. In this post, we’ll find out how you can prepare healthy BBQ and still own the grill like a boss.

BBQ has received bad press in some recent research—smoking and grilling have been linked to cancer, due to the carcinogens that can form during the cooking process. The reason isn’t just the char and smoke produced by grilling; it’s also related to the amino acids, sugars, and creatine/creatinine found in fattier meats.

According to the National Cancer Institute, when cooked at high temperatures, these substances react to the heat and create a chemical called heterocyclic amine (HCA). Additionally, as the fat from the meat drips and sizzles over the flame, smoke is produced, which contains polycyclic aromatic hydrocarbon (PAH). As the smoke rises, the PAHs cling to the surface of the meat—giving it that distinct smoky flavor, but a higher risk of cancer as well.

This risk, according to some studies, comes from the way the HCAs and PAHs affect DNA; they cause DNA to mutate, which can lead to the development of cancer. Although not definitive (not all studies agree), it does sound scary.

There are, however, ways to prepare healthy BBQ to prevent this from occurring:

Now that the scary stuff is out of the way, let’s look at three low calorie and healthy BBQ options.

Chicken is a great choice if you’re craving healthy BBQ, but sticking to lean meats. Take the skins off and you reduce the fat content even more. If you remove it before cooking and want to avoid loss of flavor, use a homemade marinade of red wine and/or spices to amp it up. Alternatively, you can grill with the skin on and remove the skin after cooking—the skin will have created a barrier that seals in the juices and keeps the chicken tender. Just make sure you add any seasoning under the skin rather than on top of it, otherwise all the flavor will be tossed with the skin when it’s removed.

Fish is another good lean-meatm healthy BBQ option. So lean in fact, Ron Swanson calls it “practically a vegetable”. Pretty much any kind of seafood will do; some great options include swordfish, tuna, salmon, snapper, mahi-mahi, shrimp, and scallops. You’ll get the protein with less fat, and you’ll get the bonus of omega-3 fatty acids and vitamin D.

Unlike fish, veggies are definitely vegetables, and no veggie is off-limits. In fact, you can grill just about anything—peppers, tomatoes, mushrooms, eggplant, zucchini and squash, even fruits like pineapple and peaches. These are all healthy BBQ options and a good alternative for those who are vegan. Not only are they full of vitamins, but they also come without the carcinogens. Use them to make kebabs and you will have better control over your portions. If you’re having your veggies on the side, consider grilled corn on the cob, or enjoy a vinegar-based potato salad or slaw.

Whatever your preference, there’s no need to skip the family cookout. Check out some of these resources for healthy recipes, and remember—where there’s a grill, there’s a way.